Recap: ‘The Future Of Digital Learning’ Event with Edsurge at NovoEd HQ

(Note: A summary of this blog post has been published here by EdSurge.)

On August 17, 2016, EdSurge hosted a meetup on the ‘Future of Digital Learning’ at the NovoEd company headquarters in the SOMA neighborhood of San Francisco. The event was organized by the EdSurge HigherEd group and drew about 100 educators, learning experts, and professionals from a wide spectrum of higher education and educational institutions (check out the Twitter hashtag #dlnchat). 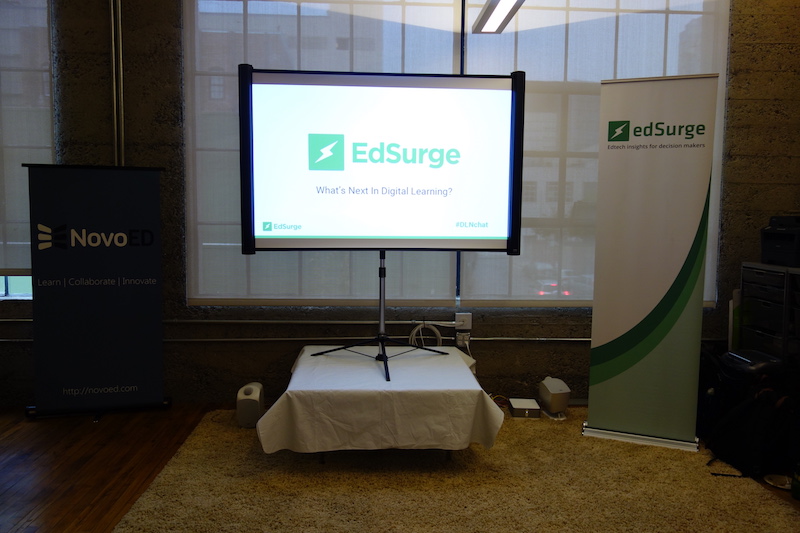 The evening provided ample opportunity for networking time, while enjoying snacks and beverages and listening to inspiring talks. We kicked off with our host for the evening, Allison Salisbury, Director of Higher Education Strategy at EdSurge. Allison shared the four main categories through which EdSurge provides its unique value: News & Information, Concierge, Community & Events, and Jobs. She also discussed their recent beta launch of their Digital Learning Network community, a new forum to share innovations in higher ed digital learning.

Next, Jen Hu, Director of Account Management at NovoEd welcomed the group, and described the affinity between how NovoEd helps institutions, through its social, collaborative learning platform, and the passions of the group in discussing what is next for higher education. She also let the audience know about a free four-part webinar series on Learning Experience Design being offered by NovoEd, starting next month.

The event was structured with five Lightning Talks of six-minutes each by distinguished speakers, followed by breakout groups where the audience got a chance to engage in a smaller setting with the speaker of their choice. Below is a brief recap of each of the lightning talks on The Future of Digital Learning.

Lightning Talk Recaps on The Future of Digital Learning

Suzanne, from the well-renowned design firm, IDEO, started with IDEO University’s imperative: to teach creativity and problem-solving. She laid out their belief that in a world of constant change, those who are best equipped are those who generate new ideas when the path is unclear. Thus, to scale this capability, IDEO formed IDEO U and developed the capability to teach these skills online. 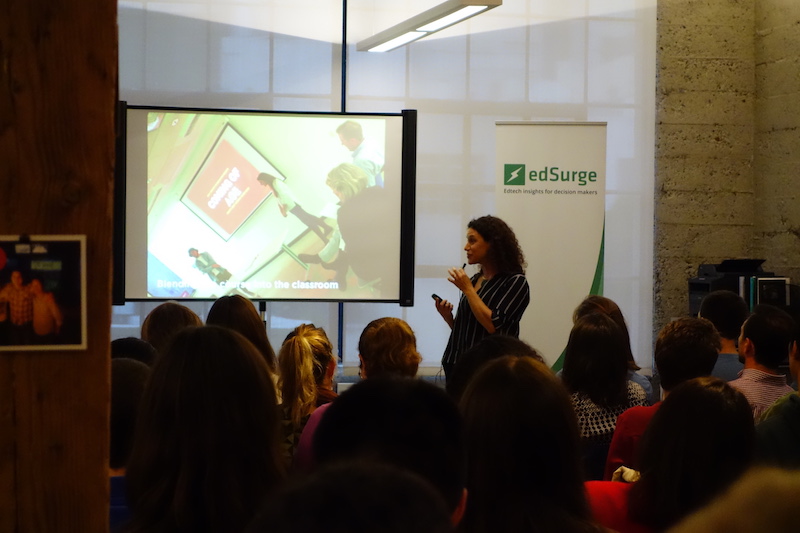 Suzanne made the case that teaching creativity is not a linear activity, and referenced IDEO U’s “creative confidence pedagogy” that represents their approach to teaching, consisting of the components: See–>Try–>Share–>Reflect. (She also showed a screenshot from a digital course from IDEO U called Leading for Creativity, taught by IDEO CEO Tim Brown.) She gave three examples of creative uses by IDEO U students, and how the IDEO U team has tried to support them:
The audience was clearly impressed hearing about the strong mission of IDEO U, and the entrepreneurial educational efforts they pursued. What is not surprising, however, is the fact that IDEO approached this with characteristic creativity and a spirit of experimentation.

Next up was the celebrated researcher Candace Thille of Stanford University. Prof. Thille is famous for originating the successful and well-known Open Learning Initiative (OLI) at Carnegie-Mellon University (subsequently moved to Stanford). She not only helped put personalized learning on the map, but also implemented it with specific university courseware, which was shown through rigorous research to be more highly effective than standard teaching methods. 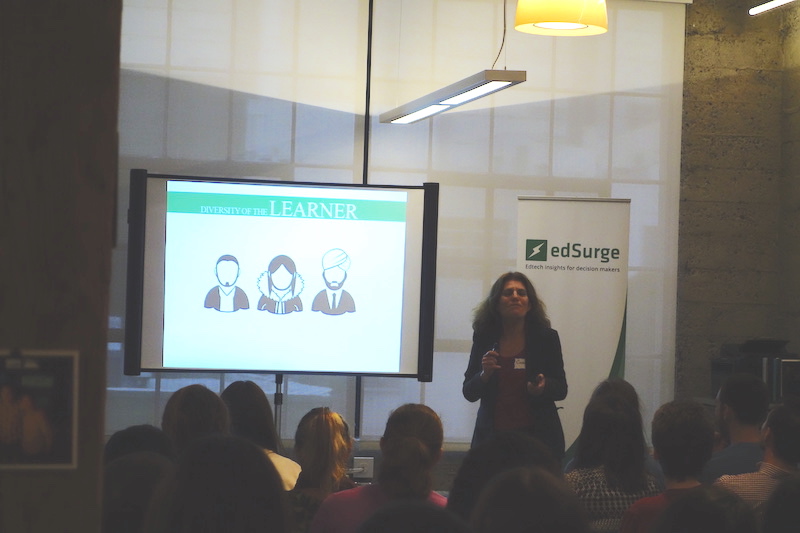 Dr. Thille used her time to talk about provocative ideas. The main one is ‘Start with the Learner’ (something that sounds intuitive, but is surprisingly not often so in the education research and edtech community). Collaborating with other Stanford colleagues, Dr. Thille has been looking for ways to take additional learner factors into account, particularly social-psychological components. She described the advances in cognitive science, including the work of Carol Dweck, Geoffrey Cohen, and Claude Steele, that have led her to work on creating even more supportive and effective learning environments.

On the topic of data science, Dr. Thille was excited by the potential to develop better algorithms for personalized learning systems. Yet she also raised concerns that having these developed, and kept proprietary, by private companies may result in “black boxes”, which are not helpful in advancing the field of research in personalized learning.

That being said, Dr. Thille’s message was optimistic, and at the end, she left us with a quote from the famous Herbert Simon, whom she worked with at Carnegie-Mellon:

She ended with the observation that we are clearly in the midst of a revolution in teaching approaches, but the question she still has is “Who will lead it?”. (Doubtless, many in the audience had their spirits leaping inside of their chests, reprising “Me!” or “my organization!” or “Someone I know!”–but that is as it should be, human endeavor has ever been driven by optimism.)

Dr. Marco Molinaro started off by showing a picture of a classroom in 1350, which looked much like what we would find in many college classrooms today (except that then they were smaller!). 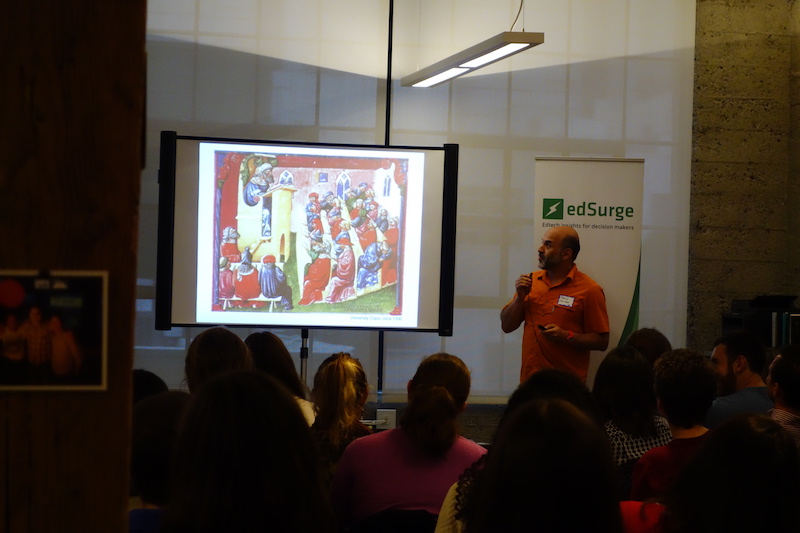 His challenge at UC Davis was to find ways to improve upon this experience. First Marco tried to approach faculty, but found that they were–ahem–hesitant to change. However, they were more open to having their teaching assistants try new approaches. So he implemented new approaches with TAs for an Intro to Biology course. He utilized OLI content (remember Prof. Thille?) to provide pre-assessment data to inform guided discussions (akin to flipping the section). The TAs were also trained in new techniques to conduct their sections. The results were clear: a ½ standard deviation improvement and an increased pass rate!
This also provided additional adaptive practice resources for students, and a dashboard for faculty to see where students were doing well or struggling. Ultimately, it was deemed a huge success, and is being adopted more widely in UC Davis’ Undergraduate STEM Education Initiative. Marco does point out, however, that they haven’t yet reached nirvana–the staff and faculty involved wished for easier ways for multiple systems to talk with each other and more advanced data analysis. Ah, but these are good challenges to have, where people are not only used to the change, but are clamoring to make it better and more efficient.

Moving on to a hot education initiative in Silicon Valley, Minerva, and Jonathan Katzman, who spoke about this start-from-scratch modern university. 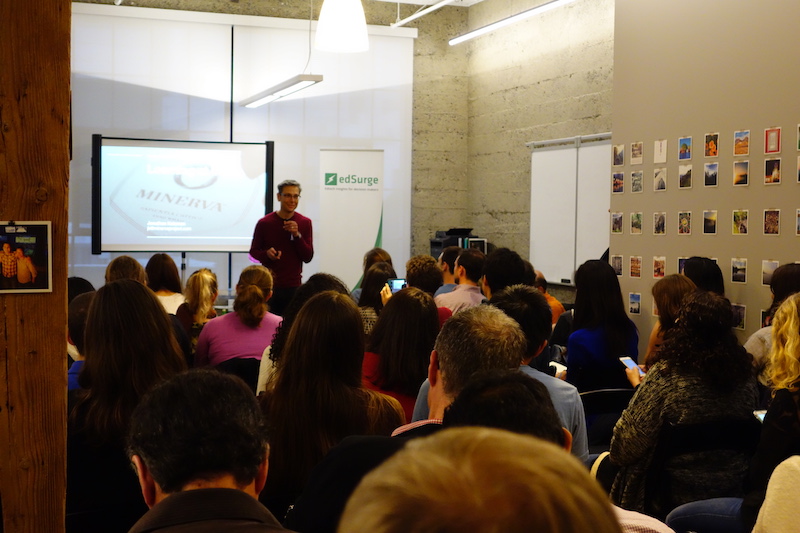 Jonathan talked about the unique advantages of designing a pedagogy from the ground-up, including building the technology that will be utilized. Minerva’s perspective is that they can’t predict what the jobs of the future will be, so they focus on developing practical knowledge. He described Four Competencies that they try to teach:

They broke down these four competencies to 120 objectives and these guide their teaching experiences. Jonathan, in describing how Minerva does not like lectures, shared the quote: “Lectures are a great way to teach, but a terrible way to learn”. Minerva uses the more intimate approach of small seminars of 15-20 students.

Jonathan also talked about how Minerva uses technology in their teaching. To them, there is no clear distinction between online vs. offline, instead, it is all interwoven. They make use of a digital classroom interaction tool, dubbed the Active Learning Forum,which allows for lively virtual experience, including polling, cold calling, and stats captured, and even allowing teachers to go back and watch “game tape” to give additional comments or feedback to students.

In addition to new methods, Minerva is implementing various methods to measure success including assessments, surveys, and employer feedback from summer internship sponsor companies. Later in his small breakout session, Jonathan described how Minerva develops their own technology, and how their programmers sit in the same room as teachers and staff as they define the type of learning environment that they are trying to create.

Rounding up the first part of the evening was Bridget Burns of the University Innovation Alliance (UIA). It is the UIA’s mission to support students of all family backgrounds to succeed in university, and they serve nearly 400K students at some of the nation’s top public universities. This focus has become increasingly important, as we have, for the first time in history, reached a point where students from low-income families will form the majority in K-12 schools. 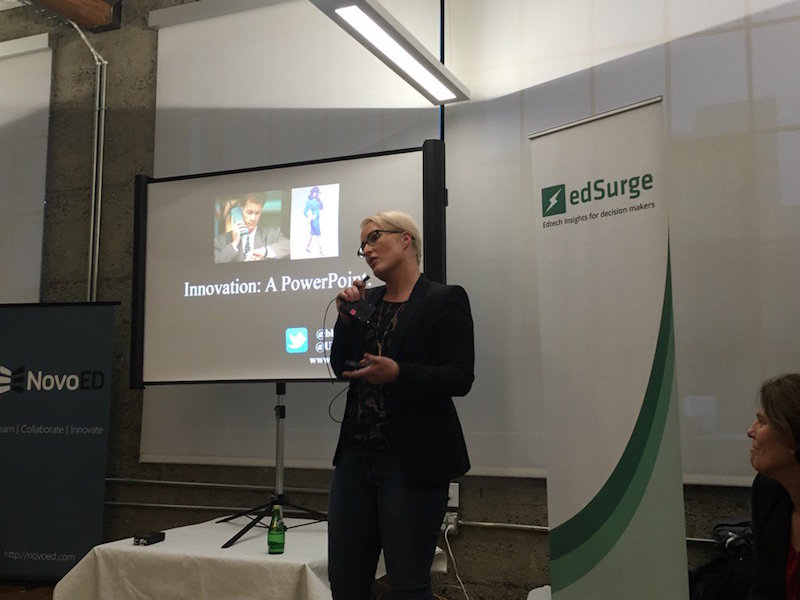 Bridget distilled for us the three things she’s learned in her work:

Bridget has worked with a lot of technology solutions in different scenarios, having advised 27 university presidents. She had a general comment for the edtech community noting that there tends to be too much focus on the productization of an edtech innovation. In many cases, services are critical to getting the solution implemented. In fact, she stated that she’d rather have an inferior product, with strong services to implement it, than working with the best leading-edge product with no support. She summarizes this with a quote that fills her next slide, s something university presidents and education researchers know, but 26-year-old Silicon Valley tech developers and VC’s don’t always know:

“The product is not the innovation. Innovation is what people can do with it.”

It was quite impressive how informative the speaking sessions were, which makes sense considering they were probably condensed from presentations lasting an hour each. It was quite valuable to watch them and then select the sage whom we wanted to sit closer to in the small breakout sessions. Those sessions were more interactive, with many questions coming from the diverse group of attendees. In addition, there was plenty of time to chat with others about the future of digital learning and learn about the various areas of education people were working in or interested in.

In all, one couldn’t but feel the positive energy, the vibe, the buzz, from a group of people so heavily involved in education, yet inquisitive and trying new things, pushing the envelope, never satisfied, and in search of a better future in digital learning. It was infectious, and we hope conversations were advanced, relationships made, and ideas sparked through this wonderful event hosted by EdSurge.

From all of us at NovoEd, we feel grateful to be a part of this community, and are looking for ways to grow and learn as we too, like many others, try to effect the changes we can in the field of learning. 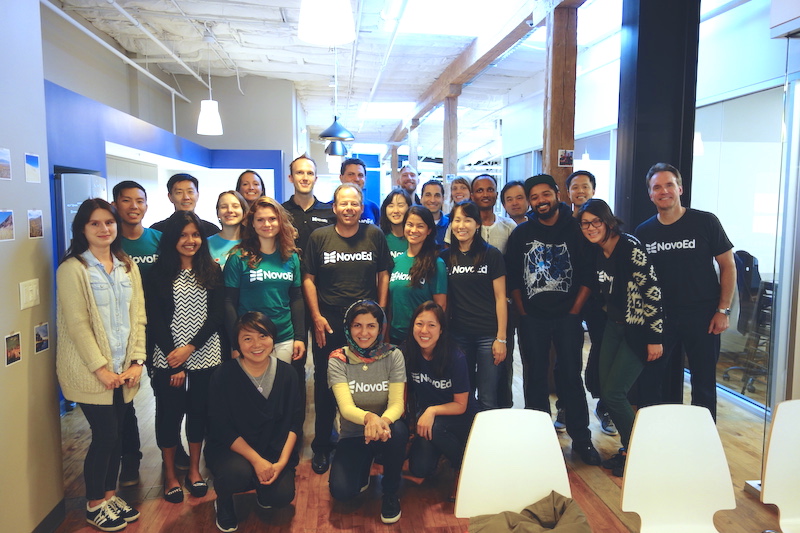 Be sure to also check out our Inspiring Lifelong Learning post.